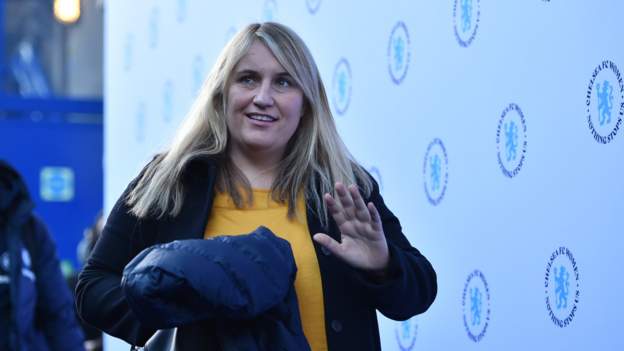 Emma Hayes said it was “like being back with family” when she returned to the dugout for Chelsea’s 3-0 Women’s Super League win over Tottenham.

Hayes had been missing since early October as she recovered from surgery.

It was a comfortable win thanks to goals from Sam Kerr, Erin Cuthbert and Guro Reiten.

Hayes said: “My back was killing me in the second half, but I didn’t feel like I was out. I just felt like I was going to be back with my family.”

The match was played in front of 38,300 fans at Stamford Bridge, a record home crowd for Chelsea Women.

The win moves Chelsea three points clear at the top of the WSL after they, Arsenal and Manchester United started Sunday level on 18 points from seven games following United’s extraordinary 3-2 win at the Emirates Stadium Saturday.

Hayes, 46, has been out for six weeks following an emergency hysterectomy as part of her “ongoing battle with endometriosis”.

In his absence, assistant Denise Reddy and general manager Paul Green have guided the team to six wins from six in all competitions, and there was little doubt Hayes would pick up where his colleagues left off.

In a typically irreverent press conference afterwards, in which he answered the phone to Kerr halfway through, before saying he had baked cookies and banana bread rather than watch Chelsea from home given his confidence in his staff, Hayes he said: “On the side of the pitch, when you’re without the ball, you can be more stressed about something.

“Today, even when the game started to wind down, I used my experience from home and relaxed, at least during the parts of the game that could stress the team.

“Mostly I was left alone – I needed to recover, I was unwell. I don’t think I spoke to Millie. [Bright] and Magda [Eriksson] for two weeks, which I really needed.

Kerr scored on 12 minutes with Chelsea’s first decent chance. A brilliant ball from the back opened Spurs up like a can of beans, the Australian shrugged off her defender, had the freedom of Stamford Bridge to step in and slot the ball into the far corner in front of the goalkeeper and three covering defenders.

Having quieted the crowd in the opening 10 minutes, it was a poor goal for Spurs to concede and they never quite recovered.

Rehanne Skinner’s side won 8-0 against Brighton in their previous WSL game on October 30 – a waterlogged pitch canceled their game against Everton before the international break – but he looked like a shadow of this team.

Skinner said afterwards: “There were some positives to take from the game in terms of how we played with possession at times, I thought we moved the ball really well, created some chances going into the final third, but I don’t think we were as convincing in our shooting opportunities as we probably should have been.

“We made some mistakes and they took advantage of them and ultimately it cost us today.”

Chelsea’s comfortable win will also reassure Hayes that he can cope with the absence of Pernille Harder, who picked up a hamstring injury while on international duty with Denmark.

Cuthbert celebrates the signing with a wonder goal

Cuthbert this week signed a new deal that will keep her at Chelsea until 2025, nine years after she joined as a teenager.

He celebrated by scoring a stunning goal in the 26th minute, slotting home a corner kick and volleying into the top corner from 20 yards. Spurs keeper Tinja-Riikka Korpela got a hand to it but couldn’t stop it.

It was 3-0 soon after when Ashleigh Neville cut down Lauren James in the box. Reiten was an unexpected choice to step up but confidently sent Korpela the wrong way.

From then on it was a straightforward afternoon for the hosts in a game that marked the 30th anniversary of the official foundation of the women’s team.

They could have had more – Bright hit the crossbar and Beth England went over the crossbar with her heel – but a Mexican surge midway through the second half showed how comfortable the game had become.

The attendance dwarfed the 24,564 who saw Chelsea take on Spurs at Stamford Bridge in 2019, making it a successful afternoon for Chelsea and Hayes.