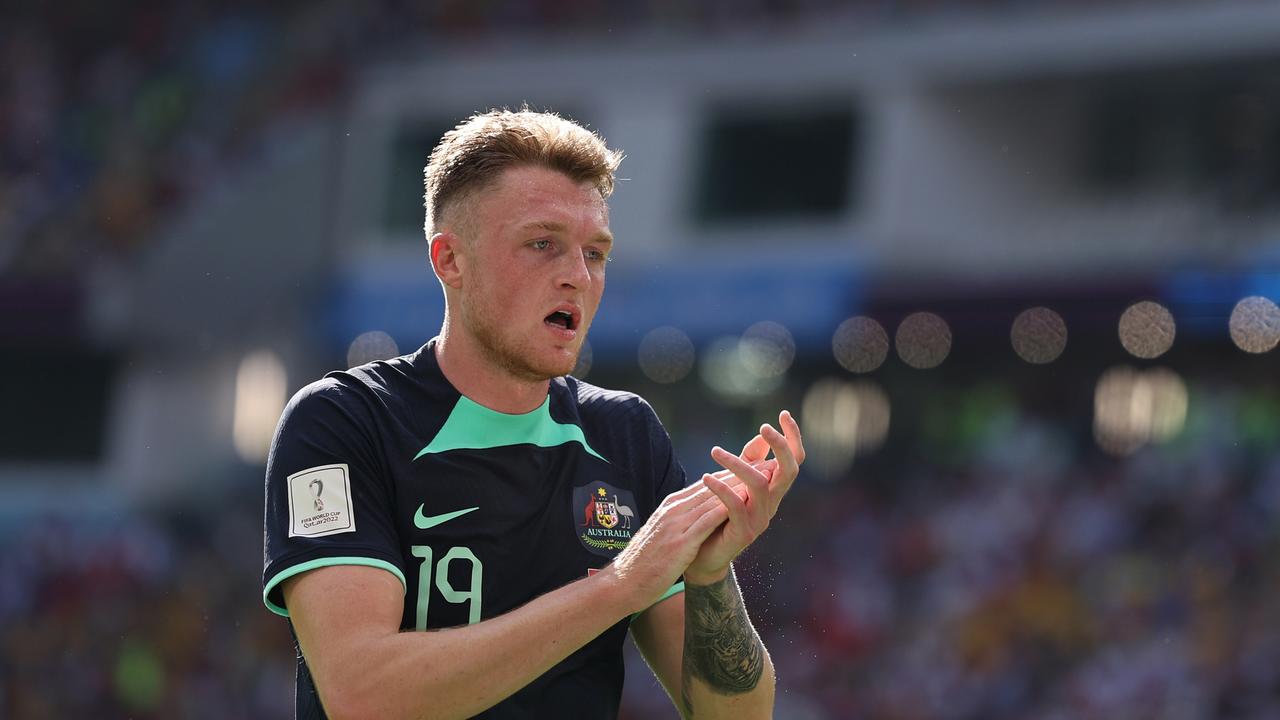 Harry Souttar’s Championship club reportedly put a $35 million price tag on his head before he was cruelly cut down by an ACL injury last year. That esteem will soar after an individual performance rated by his teammates as one of the best ever seen in a Socceroos shirt.

The 198cm Stoke City centre-back was absolutely huge in Australia’s 1-0 win over Tunisia at the World Cup – an iconic late-game save the highlight of a performance which included some mind-blowing statistics:

Watch the world’s best footballers every week with beIN SPORTS on Kayo. LIVE coverage of the Bundesliga, Ligue 1, Serie A, Carabao Cup, EFL and SPFL. New to Kayo? Start your free trial now >

Souttar, who made just his 12th appearance for the Socceroos after switching allegiance from Scotland, has already attracted interest from English Premier League clubs including Everton, West Ham and Crystal Palace. More will surely come calling after witnessing what he can deliver on the world stage.

“He’s right up there with the best (football performances) for a defender, a midfielder or a forward,” Socceroos teammate Jackson Irvine said.

“It’s one of the best individual displays (of football) ever seen, but you don’t need to be told that.

“And he is one of the first to return to the dressing room to say ‘let’s go back.’ This is the type of person and player who always wants to push us and push everyone further.

“That moment and that tackle, it was celebrated almost more than the goal … I think it will be one that will be played for years to come.”

Of Irvine’s comment, Souttar said: “That’s high praise from him,” but the usually humble 24-year-old was keen to deflect attention away from himself.

“I could go through the whole team and say what an incredible job they’ve done,” Souttar said.

The world is delighted by the goal of Mitch Duke, sweet celebration with the son

Unusual scenes in Melbourne as fans rage at Socceroos stunner

What makes Souttar’s performance even more surprising is the fact that he is just three games back from the knee injury that threatened to ruin his World Cup dream.

Australian coach Graham Arnold took a risk by picking both Souttar and Kye Rowles, who were also returning from serious injury, and the reward was Australia’s first World Cup clean sheet since 1974.

“But again it’s not just one man. All the guys were amazing today, playing their roles and doing their jobs.

“… I’ve only played three games, so I don’t think I’m 100 percent (fit), but I give 100 percent in every game. Towards the end there the legs were starting to go a bit, that the last six minutes, I thought ‘just get over it’.

“… I think you saw a team today that was willing to put bodies on the line, making blocks, tackles, headers, full-backs recovering, forwards working hard… It was a really good performance.”

Socceroos skipper Mat Ryan said of Souttar’s performance: “He’s a big kid and he’s got great qualities, we’ve seen that time and time again before his injury, but the journey he’s made to come back and give – the possibility of playing in a World Cup, only he knows the pros and cons, but all the credit to him.

Awer Mabil added: “It was amazing. We missed Harry last year but it just shows his quality and he did it on the world stage. We have a really good team and credit to Harry for having- recovered and come back stronger than ever.”

Midfielder Riley McGree perhaps summed it up most succinctly and effectively.

“He can move, he can play, he is a very important player for us.”