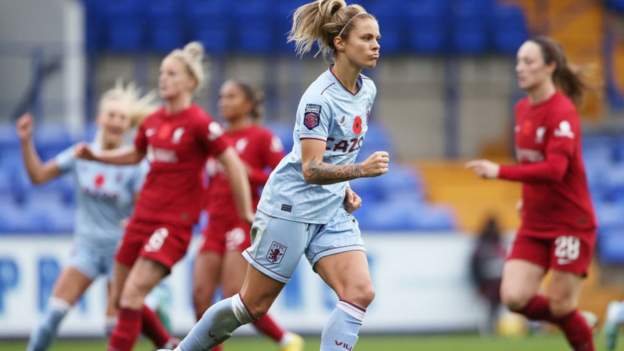 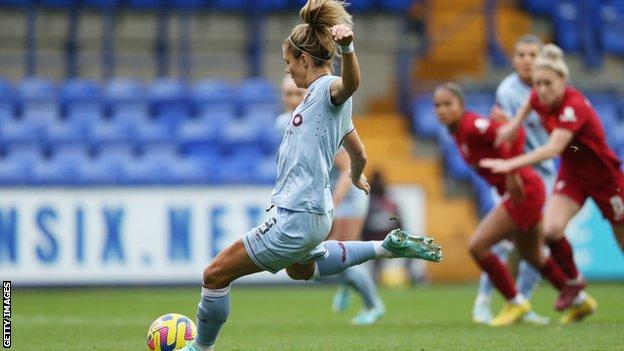 Rachel Daly scored a second-half penalty to give Aston Villa victory over Liverpool at Prenton Park in the Women’s Super League.

England international Daly fired her cross from the spot after goalkeeper Rachael Laws brought down Kirsty Hanson in the box.

Villa had the best chances in a tight game as Alisha Lehmann was denied one-on-one by Laws in the first half.

The win moves Villa up to sixth, while Liverpool are without a win in five games.

There have been plenty of distractions around the goalkeeper this week Hannah Hampton’s non-involvement but Villa boss Carla Ward praised her side’s professionalism.

“There’s been a lot of noise off the pitch but you wouldn’t know it with these players. There’s been no talk in the dressing room or around the club,” Ward told BBC Sport.

“They’re professional, they show up and get the job done. We said all week it could be an ugly game and we had to make sure we came away with the points.”

The penalty decides the next encounter

It was a wet afternoon at Prenton Park and the two teams canceled each other out for the first half hour.

Liverpool full-back Emma Koivisto and Villa’s Lehmann were often able to get back down the right side of their teams as both teams were sloppy in possession.

Reds defender Gilly Flaherty was particularly strong in the first half, while striker Katie Stengel did well to hold onto the ball as Liverpool counter-attacked.

Stengel took the shirt off Koivisto when he almost dragged it inside the right post, while Megan Campbell’s long throws caused Villa problems – Stengel nodded one into the side-netting from a tight angle.

Liverpool were finishing the first half strongly when Jasmine Matthews’ header was cleared off the line, but when it came back to Koivisto on the edge of the box, he slipped and allowed Lehmann to slot home.

She had to carry the ball almost all the way up the pitch and as she approached the goal, keeper Laws balanced herself before brilliantly tipping her shot over the post.

That capped off a first half in which Villa’s front three had posed a threat and were able to get in behind, but Liverpool looked more likely to score.

“I think the better team won the day. We dominated the ball. They had a foothold in things for about 10-15 minutes at the end of the first half and we had to weather the storm,” he added Ward.

“In the first half we were in second gear and we needed to pick up the pace and take better care of the ball. In the second half we were much better. The goal obviously changed the game.”

Villa’s quality began to show more after the break as Hanson and Kenza Dali began to link up more effectively and Liverpool’s midfield tired.

Hanson was played in behind and got to the ball quicker than Laws to win Villa’s penalty, which Daly coolly slotted down the middle.

That goal meant Liverpool became more open as they pressed for an equaliser, manager Matt Beard bringing on substitutes Shanice van de Sanden and Missy Bo Kearns to try and find a way back into the game.

“I saw it again. I respect the referee but it’s not a penalty. It’s frustrating because I don’t know what a penalty is anymore.

Ward added: “I need to see it again, but they feel pretty strongly, maybe they have a case. I don’t know. From where I was standing I would have been surprised if they hadn’t given it.”

However, Villa, now three wins from their first six games, looked comfortable at the back and did not seem to let up in the second half.

They host Reading in their next game after the international break in a strong position in the league.

“I thought [the back four] they were excellent. Dan Turner… find me a fitter centre-half in the league. There is not. He has to knock on the door [for an England call-up]” Ward said.

Liverpool, meanwhile, enter a spell Beard has previously described as “season-defining”, looking for their first win since the WSL’s opening weekend.

“At the end of the day, if you want to win football games you have to take your chances. If we had taken one or two today it could have been a completely different result,” Beard said.

“We have to change it and we have to do it quickly. Now we have an international break, so we are praying that everyone will be back in shape. It is four big games now.” 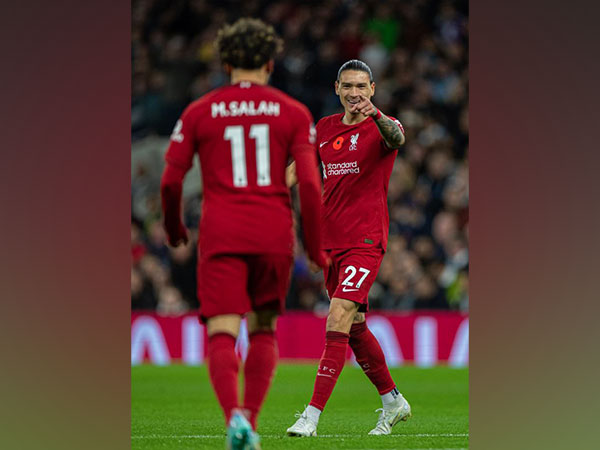