When Birmingham City retired Jude Bellingham’s number 22 shirt in the summer of 2020, they were widely mocked by the football world.

After all, Bellingham was still just 17 years old and had played just 44 games when he was bestowed with an honor usually reserved for players who retire after playing hundreds of games.

And while it may seem like an over-the-top gesture, it’s become more apparent why they did it in the past two weeks.

At the World Cup in Qatar, Bellingham, now 19, has announced himself as one of the world’s most exciting talents.

He has performed with rare maturity in midfield for England as they progress to the quarter-finals against France on Saturday.

Bellingham has been at the heart of England’s impressive displays, running up the middle of the pitch, scoring a goal and providing an assist.

The FA via Getty Images

This has come as no surprise to Manchester United, who attempted to sign Bellingham from Birmingham City in the summer of 2020.

United made an offer of around £25m, a fraction of what it would be worth today, but Bellingham decided to join Borussia Dortmund instead.

This came as a huge disappointment to United, who have since become sharper as they made a major push to lure him to Old Trafford.

In the spring of 2020, United welcomed Bellingham and his family to their Carrington training ground and brought in some of their top figures to help persuade him, including their best manager Sir Alex Ferguson and one of their greatest players, Eric Cantona.

The club believed they were close to agreeing personal terms with him and were very confident he would sign.

However, the factors of playing time and development were at the forefront of Bellingham’s mind and led to him ultimately opting to move to Germany.

With United already having Paul Pogba, Scott McTominay, Fred, Nemanja Matic and Bruno Fernandes in midfield, Bellingham was worried he would only get limited playing time when he believed he was ready to become a first-team regular team

Bellingham was more attracted to join Borussia Dortmund because of their reputation as one of Europe’s leading clubs for young talent, and at the time boasted the likes of Jadon Sancho, Erling Haaland and Giovanni Reyna.

The development of Sancho, who had joined Dortmund as a 17-year-old and in the space of three years has transformed himself into an England international and a player worth an estimated £100m, helped convince Bellingham.

“The way they integrate young players into the first team squad is next level,” he explained in November 2020. “There is no club in Europe that does it like they do.”

Over the past two-and-a-half years, Bellingham has been delighted with how the German club have helped develop him into one of the best midfielders in Europe.

As Bellingham had hoped, he started for them and has now made 112 appearances and scored 19 goals, including 8 in European competition.

That is why United, who feel vindicated that he has become the player they always believed he could be, will make another attempt to sign him in the near future.

They were hurt by his rejection in 2020, but they also understood Dortmund’s appeal for a young player hungry for playing time, and always saw it as a temporary setback in a long-term pursuit.

The club have maintained a relationship with the player’s family and have continued to monitor his impressive development in Germany.

Bellingham only has two years left on his Dortmund contract next summer, which would force them to listen to offers.

This is where it starts to get tricky because for a player of his potential, who won’t turn 20 until next summer, Dortmund will want at least £100m and hope to ignite a bidding war to raise his price to around £. 150 million

AL KHOR, QATAR – DECEMBER 4: England’s Jude Bellingham and Senegal’s Kalidou Koulibaly in action … [+] during the FIFA World Cup Qatar 2022 Round of 16 match between England and Senegal at Al Bayt Stadium on December 4, 2022 in Al Khor, Qatar. (Photo by Visionhaus/Getty Images)

Bellingham would certainly represent an impressive statement signing for any new United owner who could take over from the Glazer family next summer.

Three years ago, Bellingham chose between United and Dortmund, but now there will be much more competition for his signature.

Liverpool have followed Bellingham’s progress since he was under-11, and maintain a strong interest even as his value has risen; Manchester City manager Pep Guardiola has described him as “exceptional” and he naturally has the funds to compete, with Real Madrid and Paris Saint-Germain collecting some of the best young talent of the game, they will also have highlighted their performances in the World Cup.

There is also a good chance that Bellingham will consider next year too soon to leave Germany and even extend his contract with Dortmund. 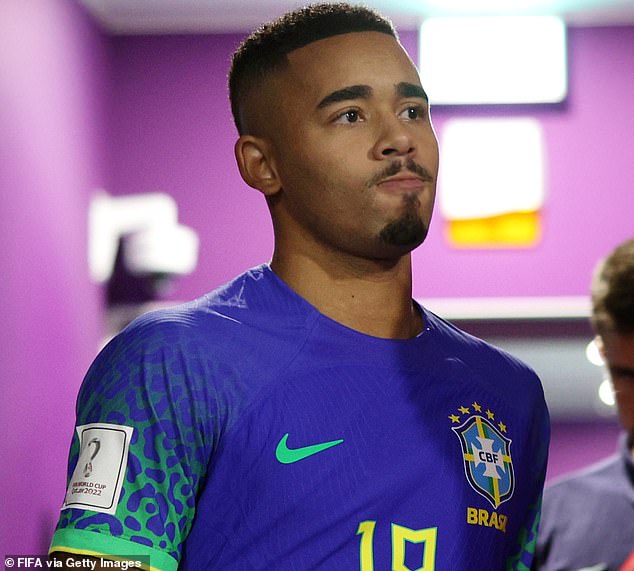