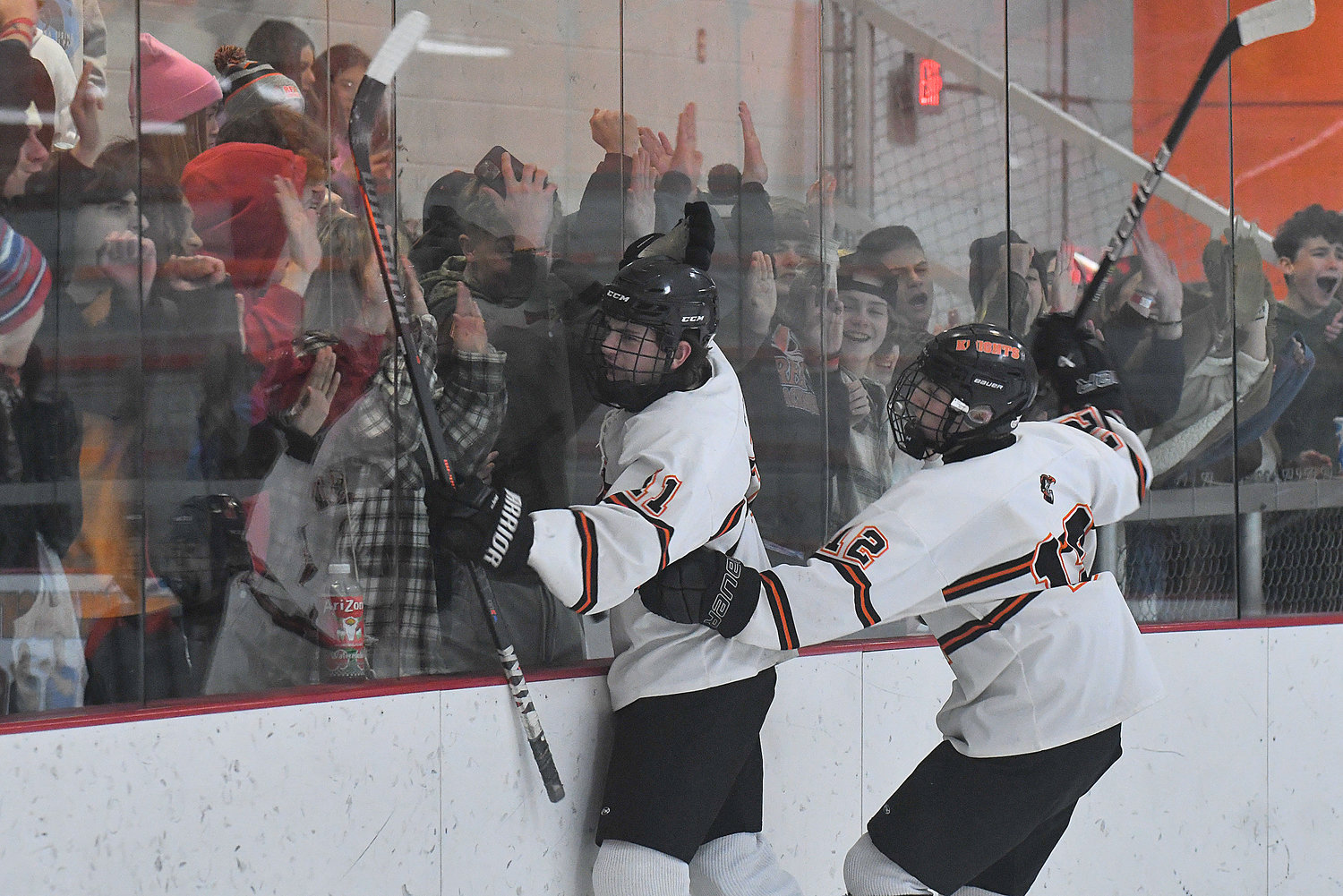 Jack Pylman and Jake Premo each had two-goal nights and Jimmy DeAngelo had a six-point game in Rome Free Academy Hockey’s 9-3 home win over Liverpool on Tuesday in the League of Division 1.

The Black Knights led 2-1 after one period after exploding for five second-period goals to pull away.

Premo had two goals and one assist. DeAngelo scored and had five assists. Tyler Wilson scored and had two assists. Jacob Bruno scored and had an assist. Johnny Sharrino and Carmen Orton also scored. With one assist each were Johnny Wilson, Chris Brement, Tanner Spina, Nate Van Wie, Nick Toth-Ratazzi and Steven Mudry.

Donte Sparace started in goal for RFA and earned the win with 11 saves and two goals against in 34 minutes. After the second period, he gave way to Braeden Sturtevant, who stopped all six shots he faced in 13 minutes. Will Gurley made six saves and allowed one goal in four minutes.

RFA improves to 3-1-1 and will host league foe Syracuse at 7pm on Tuesday at Rome’s Kennedy Arena.

The Whitesboro hockey team led 5-2 after two periods and held off Oswego for a 5-4 win Tuesday on the road in Division 2. Santino Pedulla’s hat trick helped the Warriors achieve victory

Memphis Ferguson scored and had an assist for Whitesboro. Tyler Stivali also scored. Josh Bono dished out four assists and Gavin Aceto and Kaeden Wood each had one.

Kris Matthews recorded 34 saves to earn the win in net.

Oswego’s Braden Miller scored twice. Gavin Ruggio and Parker Koproski each had a goal and an assist. Tanner Palmitesso made 28 saves in the loss.

Whitesboro is 3-2 on the season and hosts league rival Cortland/Homer on Thursday the 7th.

Goaltender Casey Clausen picked up her 17th career win (3-1 over visiting Oswego) on Tuesday to become the winningest goaltender in the history of the Clinton women’s hockey program.

The teams were tied 1-1 after each team scored in the second period. But Clinton scored twice in the third.

Gracen Grimm and Kelsey Fuller each had a goal and an assist. Lauren Rey added an unassisted goal and Leola Johnson had an assist.

Clausen, a sophomore who attends Whitesboro and plays for the Clinton Unified team, passed Hailey Millington on the hit list. Millington presented Clausen with a banner after his 12-save performance.

Clinton (5-2) hosts Scarsdale in a non-league game at 7:30 p.m. Friday at home at the Nexus Center in Utica.