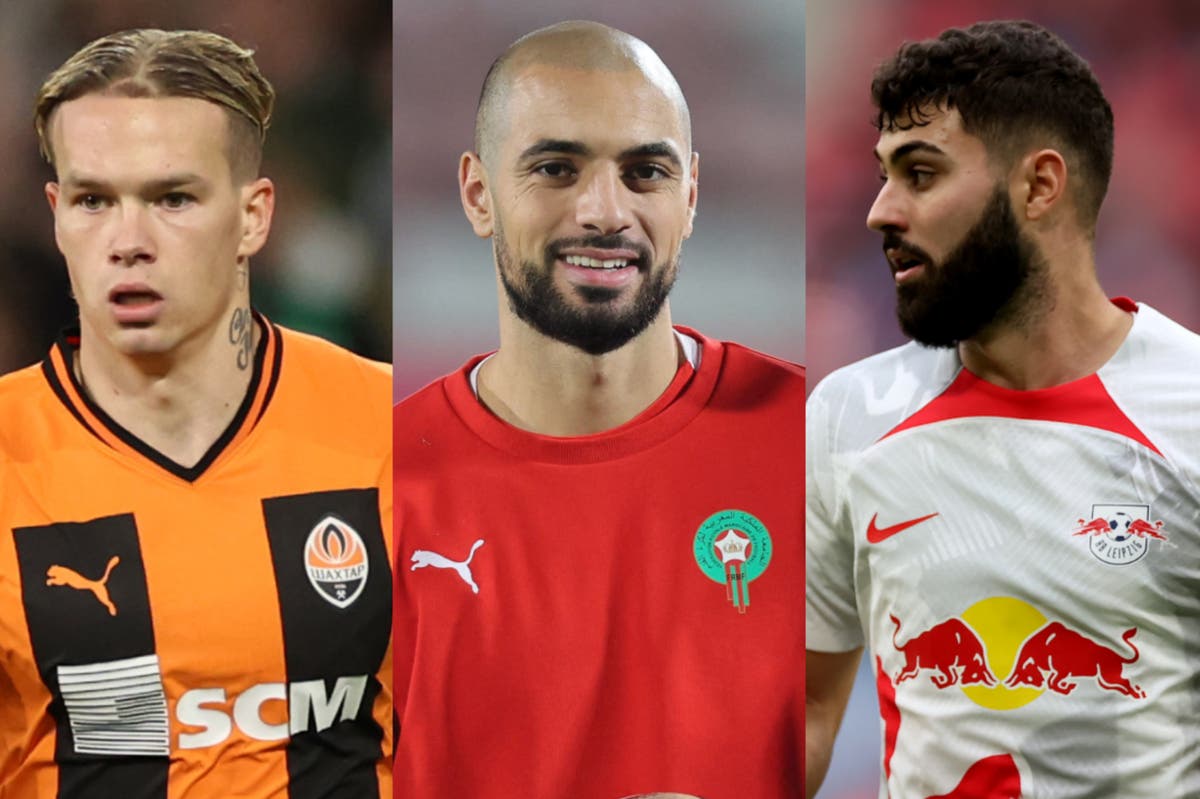 As the dust settles on arguably the greatest World Cup final of all time and Lionel Messi cements his legacy among the sport’s true greats with Argentina, attention is beginning to turn back to football of clubs and the approaching January transfer window. Arsenal, Chelsea and Tottenham are among the clubs vying to land big initial deals over the line to boost their hopes for the second half of a busy season.

Arsenal have opened talks over Mykhaylo Mudryk, who is now pushing for a dream move to the Emirates. The Gunners are also chasing the likes of Cody Gakpo and former Tottenham target Nicolo Zaniolo, with Facundo Torres also high on Mikel Arteta’s target list.

Chelsea are ready to launch a £45million move for Josko Gvardiol and may also pursue Brighton midfielder Moises Caicedo, having lined up deals for Christopher Nkunku and Datro David Fofana. The Blues are also tracking the likes of Joao Felix, Youssoufa Moukoko and Memphis Depay as they look for more firepower, while rivals Spurs are said to be stepping up their interest in Sofyan Amrabat. Follow the latest transfer news, rumors and gossip LIVE below!

Enzo Fernandez is being backed for a high-profile move to the Premier League after his World Cup heroics with Argentina.

The 21-year-old midfielder won the tournament’s best young player award yesterday after helping his country to their first world triumph since 1986 in Qatar.

Fernández has been linked more strongly with Liverpool, who have reportedly already agreed a deal with Benfica.

However, Newcastle are among the other clubs also believed to be in the running.

“Enzo Fernandez, I like this guy. 21 years: He has done nothing but improve his reputation. Around him will be clubs sniffing. Better, better clubs,” said BBC pundit Rio Ferdinand.

“He was so composed, for such a young kid at this level. Tactically very good too.”

Pablo Zabaleta added: “He showed his personality, class on the ball. I think maybe next summer he will go to a better league.

“A very complete midfielder. He can make tackles, is good with the ball and can pass it effectively.”

It seems Moises Caicedo isn’t the only one of Ecuador’s World Cup stars to have caught the eye of Chelsea.

According to Sky Sports, Chelsea are eyeing the versatile Bayer Leverkusen defender as a potential alternative should they fail to land Josko Gvardiol from RB Leipzig.

Like Caicedo, Hincapie was a key member of the Ecuador squad that narrowly missed out on a place in the Round of 16 in Qatar, conceding a penalty in their decisive Group A defeat to Senegal.

De Jong is still interested in the Man United switch

Stop me if you’ve heard this before, but Manchester United are being linked with Frenkie de Jong.

In what looked like one of the longest summer transfer sagas in recent years, United relentlessly pursued the Dutch midfielder in Erik ten Hag’s first window in charge.

A fee of €85m was rumored years ago, but in the end the deal never materialized and De Jong said he was more than happy to stay at Barcelona.

But could there be renewed hope at Old Trafford?

According to The Manchester Evening News, De Jong assured former Ajax boss Ten Hag that he was happy to join United and still plans to make a move to the Premier League.

Chelsea will battle Liverpool for Caicedo

Josko Guardiol is far from the only name on Chelsea’s January radar.

While a short-term striker solution is the obvious priority following Armando Broja’s season-ending injury, Christopher Nkunku will not arrive until the summer and David Datro Fofana is not considered an immediate first-team signing, Standard Sport understands that the new ‘think tank’ transfer at Stamford Bridge is not limited to strengthening just one position.

According to Sky Sports, Chelsea, as well as Liverpool, are interested in a deal for Moises Caicedo, although formal talks have yet to take place.

Tottenham are stepping up their interest in Sofyan Amrabat, reports suggest.

Like Guardiol, the Fiorentina midfielder is attracting huge interest after a superb World Cup campaign, where he helped Morocco become the first African nation to reach the semi-finals.

Rumors about Amrabat have been swirling for some time, with Spurs and Liverpool among the most persistent suitors linked so far.

According to French outlet Foot Mercato, Tottenham are making progress in their pursuit of Amrabat, although they could be disappointed that Jurgen Klopp has apparently made the 26-year-old his priority for the January window.

Josko Guardiol managed to redeem himself after his Lionel Messi nightmare by scoring and producing another fine display to help Croatia finish third at the World Cup on Saturday.

Despite the heartache of the semi-finals, the 20-year-old centre-back was still one of the best defenders at the tournament and is inevitably receiving a lot of interest from across the continent.

Chelsea, Real Madrid and Manchester City have all been linked with moves for Guardiol, who is set for a massive future.

And The Sun claim Chelsea will launch a £45million move to win the race next month, having successfully negotiated with RB Leipzig for the summer signing of Bundesliga top scorer Christopher Nkunku.

Let’s kick things off at Arsenal, who appear to have received a major boost in their pursuit of Mykhaylo Mudryk.

Standard Sport understands the Gunners opened talks with Shakhtar Donetsk over their No.1 target last week, with confidence they could agree a fee below the current £85m asking price.

And according to Teamtalk, while the two clubs are still separated in their respective valuations of Mudryk, the player himself is pushing hard to force a deal.

The Ukraine star has spoken glowingly of Arsenal in the past and is desperate for that switch at the Emirates.

Good morning and welcome to Standard Sport’s LIVE coverage of the January window!

With the dust settling on an epic World Cup final in Qatar, club football and the transfer business will quickly return to the spotlight with just days to go until the market officially reopens.

Arsenal, Chelsea and Tottenham are already heavily involved in the push for major new signings who could provide a major boost in this most unusual Premier League season.

Stay with us throughout the day as we bring you all the latest news, rumors and gossip.